Lately, I have found a new delight in the art which surrounds me day to day.  Much of this art comes from previous centuries but not all. It is art which has caught my eye and is not neccessarily worth much but to me it has had something to say. I will start my art blog with two watercolours which I ran across last year.

I saw these two pieces and the quality of the work was evident from the start. They were painted in 1862 by artist William Simpson. He came from Glasgow, apprenticed in the printing trade, became not only a war artist but also an artist who covered many of the important events during his life time.

These two watercolours dating from 1862 are from a period in Simpson’s life when he had been hired to go to India and capture the sights, and life on the Indian sub-continent on paper. The two landscapes come from either end of India. The first being titled ‘The Falls of Gairsoppa’ comes from the south west coast while the second finds its’ inspiration in the north west and is titled ‘The Source of the Jumna, Jumnotree’. They were finished along with 248 others after his return to England  and were intended to be published in a two volume set on life in India. Alas, this did not occur since his publishers ran into financial difficulty and sold off his paintings to acquire cash and pay debts. The V & A in London have a most amazing collection of William Simpson drawings , sketches, and watercolours. 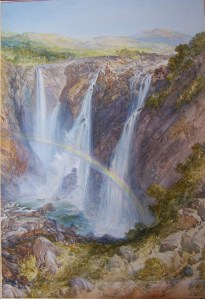 The picture on the left is the ‘Falls of Gairsoppa’ painted in 1862 and the one on the right is ‘The Source of the Jumna, Jumnotree’ also painted in 1862.I hope you enjoy them as much as I have. The quality is wonderful

Here’s a lithograph that I picked up the other day. It’s after Michelangelo attributed to Francesco Salviati and is the figure of ‘Dawn’ from the Medici Chapel in the Basilica of St Lorenzo in Florence. Done in red ink(chalk), a truly beautiful study of the female form.

Another find in the last month  is a lovely watercolour by the artist A J Crosfield and dated 1871 in the style of William Henry Hunt. 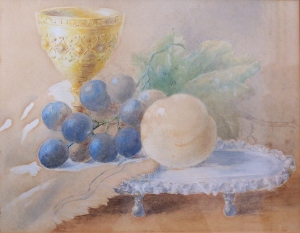 ‘Woman and Tambourine’ by Joseph Mallard William Turner is another antique etching which I have come across. It was engraved for the ‘Liber Studiorum’ around 1807 and exemplifies Turner’s elegant and classical landscape. 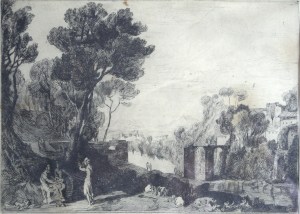 Now to a more contemporary painting. The following watercolour is signed E. Dimock, I believe it to be by American painter Edith Dimock Glackens (1876 – 1955) of Hartford, Connecticut. Quite a simple picture of people strolling on a beach. It is said that Edith Dimock was a droll woman who painted droll watercolours. Even if that was so, I find this watercolour to be quite peaceful and yet full of energy seen both in the figure running on the beach but also in the apparent movement of the clouds. 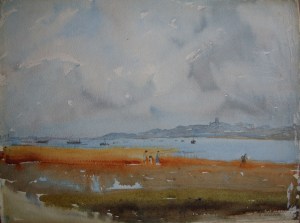 Since I have switched continents with the previous painting, here is one more which I have come across. It is signed by J Christison, titled ‘Shawnigan’, and dated 1924. James Christison (born in Scotland 1859) lived in Shawnigan Lake village from 1913 until he died in 1929. Shawnigan Lake is found on Vancouver Island in British Columbia, Canada.  A forest scene with path running into it. An inviting pathway to walk. I wonder where it might lead me to. The Shawnigan Lake Museum has on display an oil painting by James Christison if you are in the area drop in and have a look. 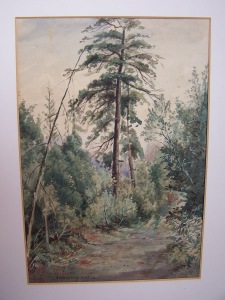