Today, we look at an artist from France. EdmondAdolpheRudaux (1840-1914) was a painter, etcher and illustrator of genre and idealised scenes. 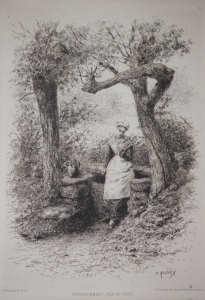 He was born in Verdun and went on to study painting and etching under artists like Lanielle, Leclaire and Boulanger. He began to exhibit at the Salon in 1863. Rudaux was a foundational member of a group of artists which revived etching in France after the passing of Charles Meryon. He along with others like Corot, Daubigny, Jacque, and Bracquemond all made etching a vital part of their artistic life and output.

At the same time , we find Alfred Cadart, publisher, who promoted artists and their etching by publishing most the their works. Cadart, certainly, published most of Rudaux’s etchings. 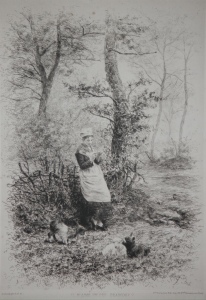 Both etchings shown here (from my collection) Passablement…pas du tout (Quite a bit…not at all) and Il M’aime un peu..beaucoup? (He loves me a little …a lot?) bear the publisher’s name and printers address “Vve Cadart Edit. Imp. 56 Blvrd Haussman, Paris.  Both were printed between 1874 and 1882.

One can see the wonderful technique and artistry which Rudaux possessed and also delight in the scenes for which he became so well known for.