A small watercolour by artist #NicholasPocock was added to my collection this week but it is the sketch on the verso that is more of interest. Pocock (1740-1821) is known for his detailed paintings of naval battles during the age of sail. Born in Bristol, the son of a seaman, Pocock followed his father and became a seaman. By the age of 26, he was master of a merchant ship. During his time at sea, Pocock became a skilled artist making ink and wash drawings for his log books. 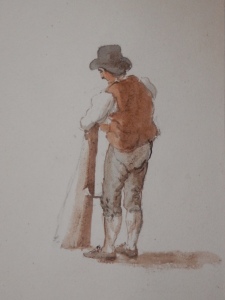 Pocock gave up the sea and became a full-time artist in 1778 and within four years he was exhibiting at the Royal Academy. His reputation grew and he moved to London in 1789 where he flourished. Eventually being appointed Marine Painter to King George. Pocock’s naval paintings were extensively researched. He interviewed eyewitnesses about weather and wind conditions, the positions, condition, and appearance of their ships. He then drew detailed plans of the battles and preliminary sketches of individual ships. He was even onboard the frigate HMS Pegasus at the Glorious First of June in 1794. 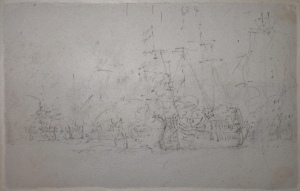 The sketch on the verso is of a naval action. I have not yet tied it to a finished work but am still studying. Being known for his naval works, the verso side of this work is possibly the more interesting although it is less finished than than the face side. And finally the label on the back for the gallery through whose hands this work was sold. 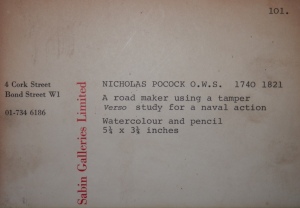