Today, a friend from Church gave me an old bible. It was the second volume out of a set. Covers intact but some water damage had occurred to the pages. Printed in 1815 (New Testament) and 1817 for the minor prophets section from the Old Testament. This printing introduced me to #RobertScott the engraver.

Robert Scott was born in Lanark, Scotland in 1777. At the age of ten, he was articled to Andrew Robertson, an engraver in Edinburgh. His career began with book illustrations but Scott soon found his niche. Scott decided early in his career to focus on engraving because it was a more economically profitable career. Scott’s most significant works were landscapes. He engraved the illustrations to George Barrie’s History of the Orkney Islands, 1805, and to Scenery of Allan Ramsay’s Gentle Shepherd, 1808. He also for many years contributed plates to the Scots Magazine and worked with artist John Bell providing the landscape backgrounds for Bell’s Poets of Great Britain. Scott ran his own business in Edinburgh and employed numerous assistants. 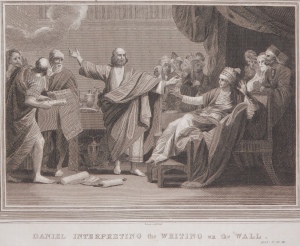 His publishing house was equipped for copperplate engraving, etching, mezzotinting, aquatinting, and lithography. Scott introduced the art of steel engraving to Edinburgh. He died early in 1841.

The etchings displayed here are fine examples of his artistry.