I certainly am not knowledgable enough in the area of Chinese porcelain and it is not something that I regularly collect but every once in a while I come across a piece that catches my eye. Such is the case with this piece of Kangxi (1662 – 1722) porcelain – I think. The blue colour is derived from cobalt oxide which is then painted onto a white clay. It then is covered by a clear glaze and baked in a kiln oven at very high temperatures.

The blue and white pottery industry became more important during the Ming (1368-1644) and Qing (1644-1911) dynasties. It was at this time that it became a commodity on the international trade market and expanding to become a worldwide commodity. Blue and white wares are common to this day in daily life in forms ranging from dinner sets to vases.

And to finish a small piece made with a yellow and brown glaze with a favourite dragon image. 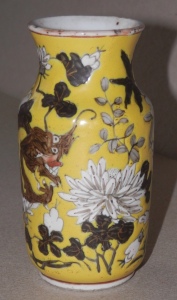 This entry was posted in Ceramics/Pottery, Uncategorized and tagged blue and white, Chinese porcelain, dragon, for dogs, horse. Bookmark the permalink.