I bought a picture at a charity shop in town this week past. Nothing new there. It was old, stained, and mediocrely framed. Due to its’ condition most people would pass it by but that is just not me. So, for only a few pounds, it was mine.And now the fun begins. The shop likely did as I in looking for information on the picture. I entered the name at the bottom of the picture into the web but nothing comes up in regards to this name. It is now time to study the picture and gain clues. The first thing I discover is that what I took in the shop to be a lithographic print was actually a drawing done in charcoal with added body colour (white) and other light touches of colour. 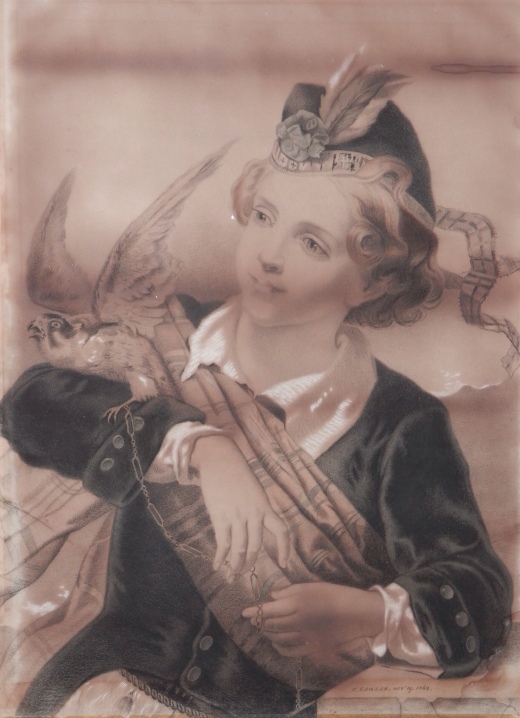 So, discovery number one. It is an artist rendering. Next, the boy has a falcon. Falconry was an aristocratic sport when this picture was done, 1862. We might deduce from that that the young man is an aristocrat. The young man is wearing Scottish garb. Thusly either Scottish or British royalty. The tam which adorns his head is a #Balmoral ribboned and the tartan we wears could be a royal tartan although without colours I am not sure. Now, if we do suggest that the young man is a royal and possibly at Balmoral, who might he be. In 1862 that royal would have to be Albert Edward, Prince of Wales. Later to be #KingEdwardVII. He is grandfather to our present queen. I have looked at images of Albert Edward and am convinced I am correct in naming the young man pictured as #AlbertEdward,PrinceofWales. There is also a clue in the picture which may mean nothing but I think it a cheeky clue to insert. The chain which is tethering the falcon is an ‘albert’ chain.

I hope you enjoy this image and I wish I could tell you more in regards to the artist for it is a fine likeness even though stained. It has live and will continue to live a well loved life.