#BlueandWhite is a combination of colours which has been possibly the most sought after for centuries. The wonderful artistry in using cobalt blue found in #Chineseporcelain has made it a collectible quantity from the 1300’s and even earlier. I came across a bowl this past week which exemplifies the artistry and resulting beauty of this art. 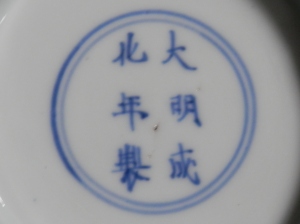 The bowl bears a #Chenghua mark (1465-1487) within a double circle on it’s base but this bowl was most likely made during the #Kangxi period (1662-1722) some 200 years later than its’ date mark. Real Chenghua porcelain is very, very rare and stunningly expensive. The decoration which is continuous around the bowl is more suitable to the later time. 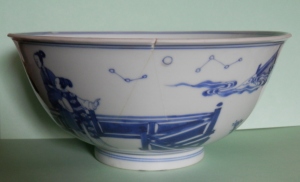 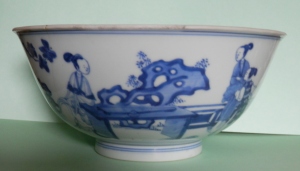 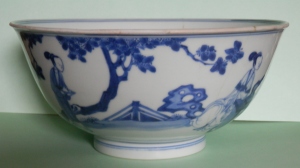 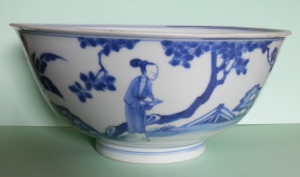 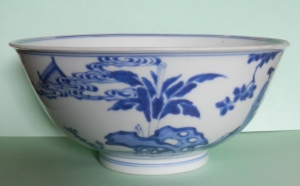 The scene shows a female servant bringing tea to a scholar/musician who sits by a table upon which a guqin lies as two other ladies look on. A guqin is a seven stringed instrument (although they have been known to have anywhere from 5 to 10 strings) which is plucked and known for its’ subtlety and refinement. Not a loud instrument – much more intimate/personal covering a four octave range.

Double circles adorn the foot of the bowl as well as the outer and inner rim of the bowl. The decoration continues in the bowl itself with a scene within another double ring. Here we see a rabbit sitting beneath a tree with clouds in the sky, a fence behind and rough terrain with tall grasses. 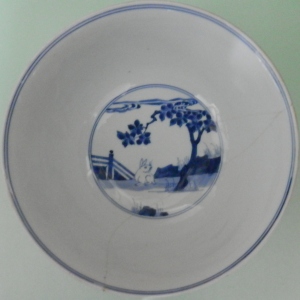 You will also notice that this bowl has been damaged. Finely mended but not restored to original. Beauty in brokenness.