In my small collection of old books are five volumes of ‘Good Words’ spanning 1862 to 1866. These were produced by the Dalziel Brothers, who ran a commercial wood-engraving company (they were considered to be the best in London at that time). 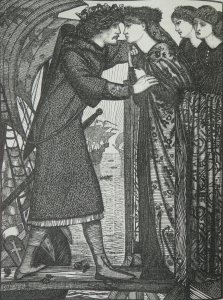 The volumes contain the monthly magazine which was edited by Queen Victoria’s Chaplin, Dr. Norman McLeod. Each monthly magazine contain parts of novels ( in serialisation), travel stories, poetry. It proved to be huge success.

The woodcut designs were done by some of the best artists of the day and at times a few lesser known artists. In 1862, #EdwardColeyBurne-Jones was a not so well known artist. He was asked for two works on the recommendation of # WilliamHolmanHunt. Holman Hunt described Burne Jones as “the most remarkable of all the younger men of the profession for talent, and will, undeniably in a few years fill the high position in general public favour which at present he holds in the professional world”. Above, you see, Sigurd, the Crusader, the first of the designs submitted and produced for the magazine in 1862. 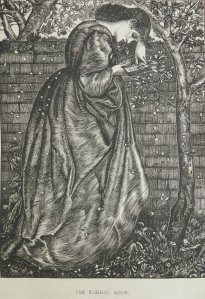 The second design produced by Burne-Jones was published in 1863 to illustrate the poem ‘Summer Snow’ by #DoraGreenwood. Here, we certainly see the individual style which Burne-Jones had developed. It was a step apart from the normal or regular woodcuts of the time. The beautiful lady who posed for this image was no other than #JaneBurdenMorris. The wife of artist William Morris. I have the photogravure by Emery Walker of Jane in my collection too. 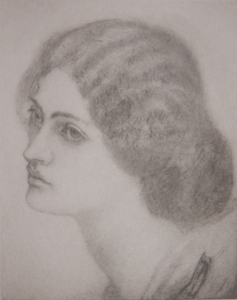