Today, I would like to consider two artists. The first #EdithGranger-Taylor (1887-1958) and the second #MurielWyman. 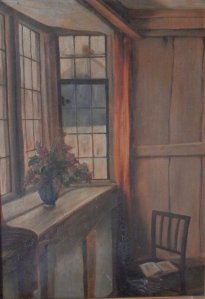 The two paintings in my collection might be considered somewhat out of the ordinary for Grainger-Taylor. As you will see they are both oils on canvas of the interior of an inn. The information I have gleaned from the web puts her more as an artist working    with pastels. Even so, both paintings bear a label on the verso giving title, price, and signature with residence.  Edith Granger-Taylor said at the Royal Academy, St John’s Wood Art School, and the Slade School of Fine Art with Henry Tonks. 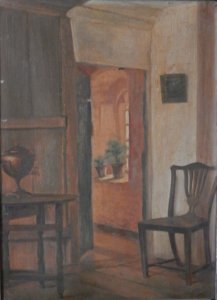 She, in some ways, was a successful artist exhibiting regularly in the 1920’s and 1930’s with two solo shows included but she suffered from non-acceptance mainly based on that she was female. This frustration saw her withdraw from the art world and she did not exhibit her work again after the 1930’s.  

The two works display a good eye for depth and shading. The two paintings show the interior of The Old George, Norton St. Philip.

The next painting Still-life with Lampshade (1952) is painted by Muriel Wyman. The only thing that I have come across in regards to her is a photograph of her and New Zealand artist Beatrix Charlotte Dobie. Dobie moved to London to study at the #SladeSchoolofFineArt in 1911. Other than this photo I have found no other info concerning Ms Wyman. 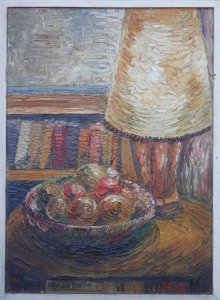 This work is done completely using only a palette knife. A nice work and very heavily painted allowing for the play of shadows on the work itself. It may be that all three women knew each other since they studied with #HenryTonks at the Slade School of Fine Art.