Today, we look at an artist who was at his best when he painted on a small scale but did paint a number of fine large pieces. #WilliamFrederickHulk (1852-1906) was born in Holland. His father Abraham Hulk and uncle Johannes Hulk were well known marine/town/canal scene painters. His brother Abraham junior was a fine painter mostly portraying the English countryside and pastoral scenes.

William travelled widely with his father but eventually settled in London in 1870. William was taught art and painting by his father and quickly became a well regarded landscape painter and exhibited often. 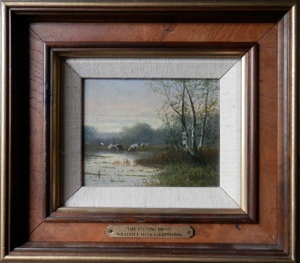 William lived in Shere near Guildford from 1882 onward and the surrounding Surrey countryside was an ever present inspiration for his paintings. He specialised in rural scenes usually including cattle and water with the effects of light and shadow on it.