I bought a pair of magazines earlier this week and they lead to our artist in this chapter. #WassilyKandinsky (1886-1944) is considered to be the father of abstract art. Born in Moscow, Kandinsky spent his childhood and formative years in Odessa. He later enrolled at the University of Moscow, studying law and economics. He was successful in his chosen profession and in 1896, Kandinsky moved to Munich to live and work. He returned to Moscow in 1914, after the outbreak of World War I. Opportunities beckoned Kandinsky back to Germany after the Russian revolution.

Here he taught and painted at the Bauhaus School of Art till 1933 when it was closed. Kandinsky then moved to live in Paris. He remained in France, even becoming a citizen, till his death in 1944. 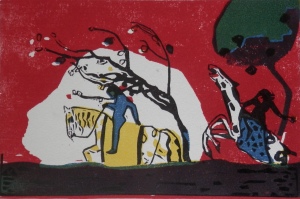 The magazine in called #Siecle XXe and I acquired numbers 3 and 4. The magazine was the brain-child of Gualtieri di San Lazaro. It was an art magazine dedicated to the promotion of modern art and artists. Artists were asked to supply works which would be used in the magazine (limited early on to 1200 copies).

For the third volume, Kandinsky provided six #woodcuts to be reproduced – 3 in colour and 3 in black and white. Thankfully all six are to be found in the volume which I acquired. They are (as they appear in the chapter)

2. Two Riders on a Red Background

3. In an Oriental Style 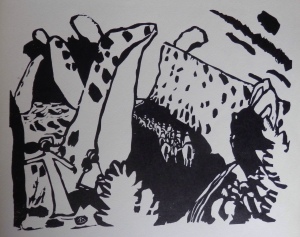