I have mentioned #WenceslausHollar previously as part of an earlier chapter. I acquired another small etching by him this past week but we will begin with a quick recap of the earlier chapter. 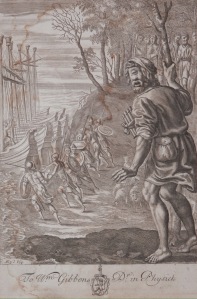 The etching comes from Hollar’s work illustrating Virgil’s Aeneid. It was translated by John Ogilby and to finance the epic undertaking wealthy patrons were approached for support. In return they would receive an etching with text removed and a commendation to the patron. One hundred and three full-page illustrations were commissioned from a number of the best known artists of the time. They include Francis Cleyn, Wenceslaus (Vacaville) Hollar, Pierre Lombard, Ludwig Richer, and William Faithorne. 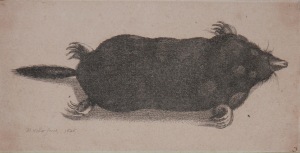 From a folio size etching to a much smaller one (2 3/4 x 5 1/2″ – cut on plate mark). Hollar was in Antwerp, in 1646, where he produced many of his most renowned works. Dutch cityscapes, seascapes, depictions of nature, still-life’s, and his ‘muffs’ and ‘shells’ series. My version (#3) of the run (full number unknown) has the two mishap scratch lines which occurred late in the etching process. A line coming from the top of the mole’s snout (toward top right)and a line coming out of the lower foot can be seen. It is signed by Hollar in the plate as well as the year of creation and there is a small number three in the bottom right corner.

Hollar produced some 400 illustrations and some 3,000 etchings. A very prolific artist but not a successful one financially for he died a destitute.