Today, we visit an artist known for both painting and engraving. #JeanBaptisteMallet (1759 – 1835) is not a well known artist for there is little information to be found on him. A Frenchman born in the city of Grasse in 1759. His studies took him to Toulon to work under Simon Julien and then to Paris to work with Pierre Prud’hom. Mallet was a frequent exhibitor at the Salons of Paris hanging works from 1793 to 1827.

His talent increased as can be seen by the medals he won – a second class medal in 1812 and a first class in 1817. Although he was a capable portrait artist, he preferred interior and genre scenes. He also painted nudes, bathing beauties and mythological scenes. 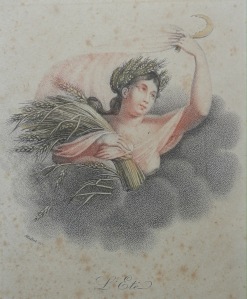 Mallet was greatly influenced by the Dutch masters before him. His exquisite treatment of curtains and fabric is highly regarded. His brushwork was meticulous and precise. His depiction of interiors is a wealth of information as to the styles of interior design and decoration.

During his lifetime, Mallet had a great deal of success and many of his paintings were copied or made into prints. He himself was a fine engraver employing the stipple method. His talent can be seen in the four stipple engravings displayed today. A set of four depicting the four seasons – printemp, ete, automne, hiver. All are printed in black and brown ink and then other colours are brushed on except for Automne which has black, brown and green ink are used in the printing and then coloured.

The body/skin appears in the reddish brown ink and the rest in black ink but only in L’automne’ do we find brown (skin) and black (all the rest) inks and then a greenish ink for the dress.

Sublime artistry and talent displayed for us by a man we should know more about.