Today we look at a drawing, acquired recently, which is after #FedericoBarocci.  Barocci (1535-1612) was an Italian master.  He was born Federico Fiori in Urbino, Italy.  He was nicknamed Il Baroccio, which is the term for a two-wheel cart drawn by oxen. Barocci’s work was highly esteemed and influential considered to be among the finest painters of his time foreshadowing the Baroque of Peter Paul Rubens.  Barocci decorated the Vatican and his altarpieces can be seen in many major churches in Rome and further afield.  Today’s focus is a version of Barocci’s ‘Hagar and Ishmael’ by an unknown artist.  Barocci’s #HagarandIshmael hangs in the Dresden at the State Art Gallery 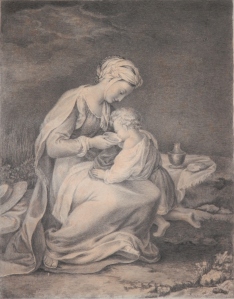 When I acquired this work, I took it to be a print in a quite simple yet beautiful frame. But after studying it, I have concluded that it is an original artwork.  A rendering of Barocci’s work but not an exact copy.  It may be the most exquisite artwork I own.

It differs from Barocci’s work in that there are no cherub heads in the top left of the image (where the break in the clouds is) looking down on Hagar and Ishmael, the palm tree and shrubbery is missing on the right of the image, Hagar’s right foot appears below her robe, as well as a few other smaller differences.  I will post images of two prints of Hagar and Ishmael at the end (one somewhat closer to this drawing).

If one looks closely, one can see the individual brush strokes in the hair and clothing.  Supreme finesse – for this artwork is but 5 1/2″ x 7″ in size.

Of course, others have interpreted Barocci’s work and as promised two versions of Hagar and Ishmael – one by a lithograph published by Hanfstaengl between 1836 and 1852 and a second a plate created for a bible (version yet unidentified) by an unknown artist.  One can, after study, note the differences between versions.  All beautiful works of art inspired by a master. 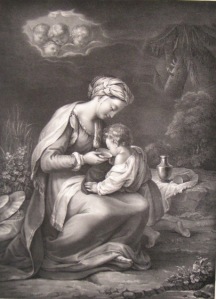 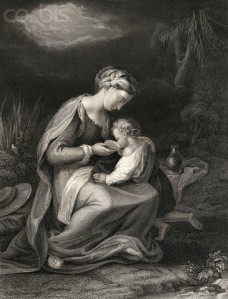