If you recognise the name of #FrederickLandseerMaurGriggs (1876-1938) you are sure to be an avid fan of etchers and etchings. F. L. Griggs, as he signed his works, was born in Hitchin, Hertfordshire and for me that makes him a local artist.  He studied at the Slade School of Art and became a draughtsman.

He worked only for a couple of years at this occupation eventually giving it up in favour of becoming an illustrator and graphic artist.  Griggs worked on the Highways and Byways series of countryside guides published by MacMillan.  He started with his home county of Hertfordshire and continued drawing 12 more counties illustrating the historical and popular sites found therein. 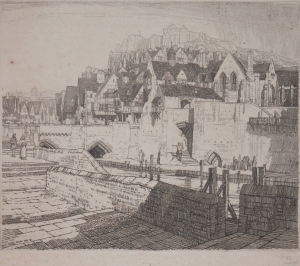 In 1903, Griggs moved to Chipping Campden in the Cotswolds to continue his illustrating of the counties.  Here he remained until his sudden passing.

The suggested cause for his redirection and concentration on etching was his conversion to Catholicism in 1912.  Griggs’s visionary drawings were greatly influenced by William Blake, Samuel Palmer.  From that point, his drawings became superbly worked etchings which where technically sublime.  His idealised Gothic buildings and landscapes captured an England portraying an idyllic yet fading dream of earlier times

His etchings number but 57 finished plates (usually in small print runs) but they place him among  the most respected etchers of his generation.

My copy of #TheQuay by F. L. Griggs is one of about 40 pressings.  It is not numbered but is inscribed (in pencil) lower left ‘To Walter Millard in gratitude from F L Griggs’ and signed by the artist and dated lower right – both outside the plate marking.  #WalterSamuelMillard was an entrepreneur, naturalist and early conservationist as was Griggs who was an executive member of the National Trust.

This entry was posted in Etching and tagged etching, F L Griggs, quay. Bookmark the permalink.