It always helps to paint or have famous people as the inspiration of your art.  This week I want to look at a couple of pieces which have Napoleon as there subject.

Napoleon at Friedland by Daniel Devreaux

We begin with an image of Napoleon by #DanielDevreaux (1914-2010) at the battle of Friedland.  Napoleon was a great horseman and had a number of steeds which he loved to ride.  Friedland was the site of a major confrontation between the French and the Russians which ended with Napoleon’s forces routing the Russian forces under Count von Bennigsen.  The battle of Friedland was effectively the end the war as the emporer was forced into peace negotiations with Napoleon. 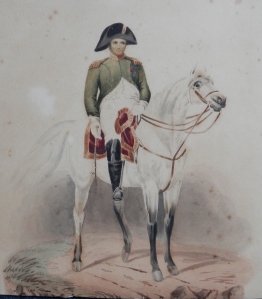 As stated, #Napoleon loved his steeds.  He had 52 horses in his personal stud.  His favourite was named Marengo.  Marengo was named after the Battle of Marengo through which he carried his master safely.  #Marengo was an off-white/grey Arabian from Egypt who stood 14.1 HH (hands high) or 57″.  A mount of great courage and reliability, he was wounded 8 times and finally captured at the Battle of Waterloo.  He was brought back to England to a stud farm near Ely.  He was not a successful sire.  Marengo died at the old age of 38.

The lovely watercolour is not signed but is very much like the artworks of #PiotrMichalowski.  With simple lines and surety of delineation, Napoleon and Marengo exude a fire, a joy, charisma, beauty and bravery.