In the last few weeks I have added several portraits to my collection.  We begin with #AdelaideWebster, painter in oil and watercolour.  Adelaide was born in Glasgow in 1877.   Adelaide Webster succeeded early in her career. She regularly exhibited her portraits and landscapes at the Glasgow Institute. She studied not only in Glasgow but went on to study in Paris. While in Paris, she was acquainted with many of the leading French painters of the day, including Degas.

After her studies, Adelaide Webster lived and worked in both London and in Paris. In London, she was a member of and exhibited frequently with the society of Women Artists (until 1919).  Her early career was crowned by being awarded the prestigious Prix de Paris in 1910.

At the end of WWI, Adelaide married George Henry Donald. He was a Presbyterian minister from Montreal, Canada.  They moved to live in Montreal in the 1920’s.  Due to her husbands strict religious beliefs, Adelaide was not allowed to exhibit her artwork.  Although unable to exhibit, Adelaide did continue to paint in her downtown studio on Crescent Street.  She became friends with leading Canadian artistic figures like Arthur Lismer and Harold Beament.

After the death of her husband, she began once again to exhibit her art primarily with Montreal’s Dominion Gallery.  She had, once again, a successful career.  She was commissioned regularly to paint the portraits of many prominent individuals.  Among these were Norman Bethune (physician & medical innovator) and Dame Sarah Fischer (opera diva).

The beautiful pastel portrait may be a self-portrait of Adelaide herself.  The technique is superb and within it one can find elements of the Impressionists – an influence from her time in Paris. These can be seen  particularly in her paintings and watercolours which she made after moving to Montreal.  The label on the verso notes that the picture was framed by W. Scott & Sons, 1490 Drummond Street, Montreal, 1936.  She was known as #AdelaideWebsterDonald in Canada. 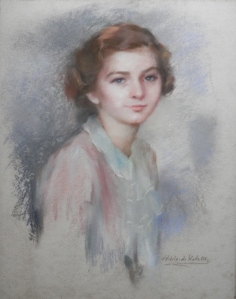