From a Poet Priest to an Adulteress Muse

Two people who in different ways either created or caused to be created beautiful art.  We visit with #GeorgeHerbert and with #JaneBurdenMorris.

George Herbert was born into an artistic and wealthy Welsh family.  Herbert received a fine education culminating at Cambridge. 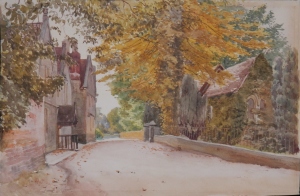 He had intended to go into the priesthood but was persuaded to enter politics for a while before taking holy orders.  Herbert wrote religious poetry throught out his life but his time at Bemerton was his most prolific.   Herbert’s poems have endured in various ilks such as popular hymns, including “King of Glory, King of Peace”, “Let All the World in Every Corner Sing” and “Teach me, my God and King”.  His biographer wrote that he composed “such hymns and anthems as he and the angels now sing in heaven”.  Herbert suffered ill-health all his life and he died at the early age of 39 from consumption (tuberculosis).  The quaint  watercolour on the left shows the ivied walls of St. Andrew’s Church, Bemerton on the right and the rectory on the left.

On the other side of the economic divide, we meet Jane Burden.  Born in Oxford to a stableman and  a laundress, her early life was one of poverty and privation.  Jane was a beautiful young woman and at 18 she was discovered by #DanteGabrielRossetti and #EdwardBurne-Jones.  She sat regularly and often for Rossetti and Jones and through them she was introduced to #WilliamMorris.

William and Jane married in 1859.  Being little educated in youth, Jane set about to her learning as was befitting the wife of a rich gentleman’s wife.  Jane had a keen intelligence and loved to read.  She became proficient in French and Italian as well as becoming an accomplished pianist. Her manners and speech became refined.  Jane may have been the model for the heroine in the 1884 novel Miss Brown by Vernon Lee.  The heroine upon which was based the character of Eliza Doolittle in Bernard Shaw’s play Pygmalion and the later film ‘My Fair Lady’.  She also became a skilled needlewoman who would be later renowned for her embroideries.  Her affair with Rossetti began several years after her marriage to Morris and lasted in some form or other for 17 years.  She also had an affair with Wilfrid Scawen Blunt.  A beautiful woman who was the model for ‘Queen Guinevere’ by Rossetti  and Morris’s ‘La belle Iseult’.  A woman who inspired those around her to great feats of beauty.

The image above is taken from William Morris’s drawing which now resides in the British Museum.  The drawing was folded in two – so is creased badly across the face and has a stain on the face a well.  #EmeryWalker was asked to etch the image and has done a very fine job in doing so.