The maps in my collection cover many areas and times and recently I picked up an atlas.  The art of map-making was at it’s most beautiful in the 16th and 17th centuries.  Prior to that maps were on the the most part utilitarian.  Undecorated and used only for navigation.  Maps came in two types – what we might call a standard aerial view and a landscape or perspective view.  I have a number of each type. 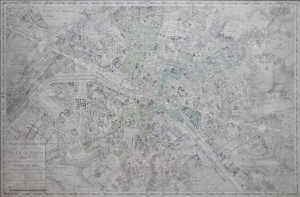 A fine map of #Paris from 1837 by #CharlesPicquet (1771-1827) – map maker to the king . Published after his death this map was most likely drawn around 1826.  A detailed map which includes not only street names but also major sites of interest and importance.  No street index is found on the map so it was most probably on an additional sheet.  I have not yet found this exact map in my research so can tell you little about it.

To a perspective view of the city of #Chester. A view from the south drawn by #JBoydell in 1749.

South View of the City of Chester by John Boydell @1749

At times, these perspective views have the names of prominent buildings and places added onto them to inform one what they are looking at although this is a more European trait than English.  These perspective views were also used in the mapping of specific places as is seen in the last of the images which is the #EastViewof theRuinsofthe AbbeyofReading done by M. Blackamore in 1759.  I’m afraid this print has been water stained but one can still appreciate the mapping idea which this image portrays.

The beauty of maps both art and history in cohesive form.  To be admired and to be used.