The etchings today are of the sea as viewed from the shore.  A stormy sea, a shipwreck, low tide, and a calm coastal scene done by different artists.

The Morning After the Wreck
etching by J Cousen @ 1888

#TheMorningAftertheWreckofaDutchEastIndia-Man is this etchings full title.  Etched by #JCousen after a painting by C Stanfield.  Depicting the wreck of a freighter as it breaks up on a reef.  A fine depiction of the sea and those who struggle against it.  Here – a few insets to show how talented J Cousen was as an etcher.

The Morning After the Wreck Inset 1

The Morning After the Wreck Inset 2

Te Morning After the Wreck Inset 3

Now a calmer coastal scene at low tide titled #OntheCoastofPicardy.  Etched by an unknown hand after a painting by #RichardParkesBonington.  Once again a wonderful steel engraving done in the first half of the 1800’s. 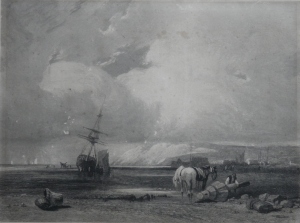 On the Coast of Picardy unknown etcher @ 1830

On The Coast of Picardy Inset 1

On The Coast of Picardy Inset 2

And to finish, a pastoral coastal scene.  Once again done by an unknown hand but from a painting by Albert Cuyp.  Etched around 1838.

A post of few words but then wonderful works of art need not be long-winded but rather they are at times beyond words and need to be experienced .