When I began collecting , I decided and have continued with the idea that if an art piece caught my attention it was worthy of being added into my collection.  This actually means that even broken pieces have entered into my gallery.  It also means that when talking about sculpture or porcelain – monetary value certainly does not enter into the picture since completeness/wholeness is a major factor of value.  But just because a piece is broken does not mean it does not retain any allure.  So to the little sculpture I bought.

A small piece of #VerdiMarble (4 inches long by 2 inches wide by 4 inches high) out of which has been carved a boar.  This small item is a copy of the larger version which sits in the Mercato Nuovo, Florence.  It is known as ‘Il Porcellino’.  Sculptor Pietro Tacca made the model from which the bronze was cast in the 1630s.  He created his copy from the life-size marble given by Pope Pius IV to Cosimo I de’Medici which now sits in the Uffizi Gallery.  Sculptor Antonio Susini, also, produced smaller-scale bronze versions.  An immensely popular image for all artists, bronze reductions were made throughout the 17th, 18th and 19th centuries. 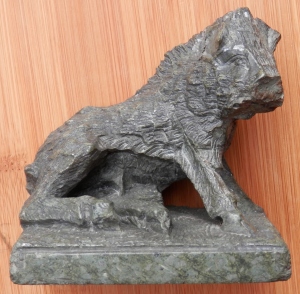 Alas, my little #IlPorcellino has lost both his ears, his snout, his lower jaw, as well as his whole head at one time.  Even in his brokenness, I still like him.  His age could be any thing from the 17th to 19th century.  He is not signed so there is no artist to connect him to.

I am not a sculptor and holding this in my hand I find it amazing that one hits stone with hammer and chisel and something comes out of it.  A slip would mean a chip or crack – a ruined piece.  How hard does one have to tap? 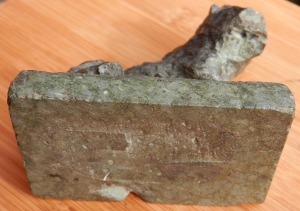 From stone to sculpture by the hands of an artist – even when broken something of the original remains.  Something intangible and yet something which can be felt.