Like architects and designers, artists at times develop and produce sketches and plans for works with which they vie against others to have produced or commissioned.  The other day, I bought an artwork of a proposed rail station by the artist #CharlesJosephHullmandel.

Charles Joseph Hullmandel’s hand-coloured print showing how the Greenwich railway would have crossed the Park south of the Queen’s House.  The railway was London’s first suburban line, which ran from Spa Road, just east of modern London Bridge Station, to Greenwich in 1836.  The design by Charles Hullmandel was not agreed on even though it is quite an impressive structure.  Wonderfully hand-coloured this is a part of history which in a way didn’t happen.

We move to artist #JosephSkelton, who began publishing parts of his ‘Oxonia Antiqua Restaurata’ in 1818. He completed the project in 1820.  The Oxonia Antiqua has a folding engraved plan of Oxford and one hundred and thirty-four plates by Skelton.  This is but a single hand-coloured  print from that publication.  One can easily appreciate the quality of workmanship just from this single image.  Brazen Nose College is of course found in Oxford.  I don,t know whether these plans were accepted or not  but again the building is impressive.

And finally for fun a print by #EdwardHacker called ‘A Rough Lot’ after #WilliamBarraud. 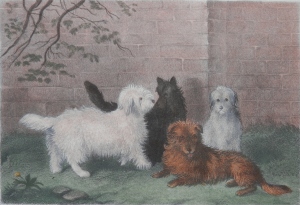