Art of ‘The Shambles’

‘#TheShambles’ or ‘Shambles’ is an old street in York although it can refer to the  maze of twisting, narrow lanes which make York so charming. It contains over-hanging timber-framed buildings some from the 14th century.  In some places it is possible to touch both sides of the street with your outstretched arms.

‘Shambles’ is an obsolete term for an open-air slaughter-house and meat market.  Originally called ‘The Great Flesh Shambles’ there were some 25 butcher shops in the street in 1872.  There are none remaining although some of the shops still have meat-hooks and display shelves on their exterior.  Most of the shops are now taken by eateries, jewellery, antique and souvenir sites as well as a bookshop and a bakery have found their way there too.  The ‘Shambles’ is mentioned in the Domesday Book, so we know that it has existed for over 900 years.  It was a dangerous and unhealthy place in the Middle Ages, and most likely a hot spot for periodic outbreaks of plague.  It has also been a source of inspiration to a great many artists over the years.  We see, firstly, an etching by #RobertHerdman-Smith (1879-1945).  Likely from around 1920-1930, one can easily see the timber buildings leaning out into the street restricting the light and deepening the shadows.

We see almost the same view from #PercyJWestwood in his etching entitled ‘York’.  We feel the shadows far more here, the nooks and crannies where the sunlight does not reach.  The pavements are raised on either side of the cobbled street to form a channel wherein the butchers would wash away their offal and blood twice a week.   The overhanging timber-framed fronts of the buildings are deliberately close-set so as to give shelter/shade to the ‘wattle and daub’ walls below.  The shade would also have protected the meat from any direct sunshine.  The street is the best preserved medieval street in the world. 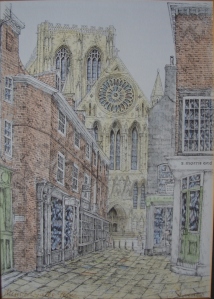 And finally a view from the top end of ‘The Shambles’ which begins by the mighty York Minster.  A street well worthy of a slow amble on your visit to a lovely city.