Art of the Dot

I beg your indulgence as I return to a topic which I have talked about earlier.  The artistry and beauty of the stipple engraving. 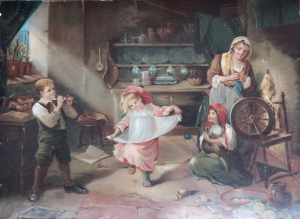 Perhaps some might call what is portrayed in this picture dated, idealistic or naive and in truth it might be.  But what can not be argued is the beauty of the colours. The ray of light which falls upon the dancing child can but lead your eye to the joy which is expressed in her face and make you smile in response.

Many of the stipple engravings which you see around today are copies of or have been inspired by paintings or drawings.  When one produces such a wonderful artwork in response to another artwork it can but be a compliment to the original.  So could this picture be a tribute to George Morland, Henry Singleton, or by Bartolozzi.  I don’t know. I just like soaking up the joy and happiness it exudes and the memories which it brings to mind and that is enough for me.

Once again the thing which drew me to this stipple engraving was its’ vivid colours. It draws the eye from title into the image – over-top the flock – past the shepherd – toward the expanse of sky.  The colour of the roof on the cottage forces your eye to the left – then up into the trees which stand beside the house and again into the sky overhead.  A pleasing picture to look at and consider that you are standing on the edge of the road as the sheep converge upon you.  A calm and placid place to be with a depth of wonderful colours to please the eye.

And my final stipple is actually a book plate.  It is of the Scottish poet Robert Burns and comes from an 1845 edition of his complete works. It shows its’ age with some foxing but still has some lovely qualities about it.   It is not purely a stipple engraving since it has some line engraving in it but it does show what one can do when you combine the two styles.  I hope you enjoy and do read a bit of Burns’ poetry to bring ye ta the highlands.  You might just pass the shepherd on the road with his flock and overhear the music and laughter coming from the cottage in which the children are playing.