Art of the Mystical

Great art has for centuries shown religious mysteries such as the Virgin Birth, the Transfiguration, the Rapture, Christ in glory, etc..  Art has never and can never claim to explain the mysteries it displays.  It is but only a rendition, an interpretation by the artist of something mystical, something unexplainable, something believed yet unseen. 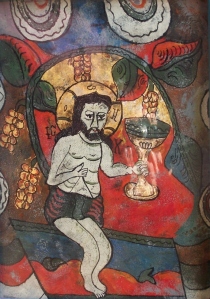 The Mystical Wine-press?Jesus and the Vines

Such is the painting on the left.  It is called ‘The Mystical Wine-Press’ or ‘Jesus and the Vines’.  This is the only ‘icon’ in my collection at present.  It comes from Transylvania and specifically a town called Nicula.

It shows Christ with a vine growing out of His side.  The ‘Mystical Wine Press’ is an allegory for the sacrifice of Jesus and His presence in the communion wine.  In this sacred rite, wine becomes the blood of Christ, which we drink in remembrance of His death, for He is The True Vine, giving life to those who abide in Him as branches.

This is called a reverse painting since one is working on glass.  Realistic reverse paintings are more challenging to create as one must, for example, in painting a face, put the pupil of an eye on the glass before the iris, exactly the opposite of normal painting. If this is neglected the artist will not be able to correct the error as they will not get in between the glass and the paint already applied.

This naive folk art was very popular in the 19th century but fell out of  favour in the early 20th century.  It came very near to disappearing completely and only in the last 15 -20 years has made a come back but artists have had to re-invent paint compositions, now, by using acrylics and oil paints as well as the techniques for reverse painting.

On the reverse, at the top of the backing it reads

Offenbach/Main is one of the great German glass centres renowned for their glass painting/etching.  Why their names appear I do not know.