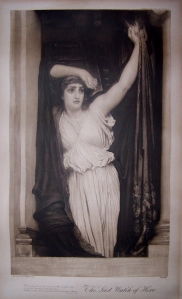 The Last Watch of Hero
printed by Lord Leighton

This week I have added two large antique prints to my collection. The first is titled ‘The Last Watch of Hero’. The original was painted by Lord Leighton(1830-1896) around 1887. Lord Leighton is renowned for his drapery or the way material hangs both on and off the human figure. The oil painting now resides in the Manchester Corporation Gallery. I’m not sure when my print was made. It is of one panel only, the oil painting is made up of two compartments; in the upper, and larger, Hero, clad in pink drapery, is seen drawing aside a curtain and gazing out over the sea. Below, in the smaller panel, is the body of dead Leander, on a rock washed by the waves. A quotation from Sir Edwin Arnold’s translation of Musæus was attached to its title:

“With aching heart she scanned the sea-face dim.

Lo! at the turret’s foot his body lay,

Rolled on the stones and washed with breaking spray.”
Hero & Leander
Hero and Leander lived in rival cities separated by a stretch of sea. The lovers conspired to meet every night. Braving the current, Leander swam across the water guided by a lamp which Hero lit. Tragedy eventually struck when winter winds blew out the lamp. Without his guide, Leander floundered and drowned. In the etching Hero’s draped robes convey her torment. We see her as she begins to fear that Leander has been lost to the sea. And when that has proven to be the case, Hero throws herself onto the same rocks and the lovers are joined in death.
The image size including title and poem measures 12″ by 22″ while sheet size is 19″ by 27″ and the print is set in a 23″ by 31″ frame.

The Challenge
painted by E Landseer & engraved by C Mottram 1896

Here we have ‘The Challenge’ painted by Edwin Landseer and engraved by Charles Mottram. This print was published by The National Art Society on September 5th, 1896. The original painting was done in 1844. In the 1840’s, Edwin Landseer created a series of stag paintings based on his trips to the Highlands in Scotland. These paintings depict the animals fighting, challenging each other, reaching safety across a lake, being hunted or shot dead; their bodies are painted with superb accuracy as well as the landscapes which surrounds them … they bring to animal painting the epic and heroic qualities of high art such as the ‘The Last Watch of Hero’. The image size of this print is 12″ by 27 1/2″ while the sheet size is 20″ by 38″ and in it’s frame it is 23″ by 40″.

2 Responses to Art of Print