Jean-Francois Millet (October 4, 1814 – January 20, 1875) was a French painter and one of the founders of the Barbizon School in rural France. He painted mostly scenes of peasant farmers and country life. He was part of the “naturalism” movement , but could also as be considered a “realist”. The Barbizon School was a group of landscape artists working in the area of the French town of Barbizon, south of Paris. This group abandoned tradition and theory in an attempt at a truer representation of life in the countryside. Although coming from the same school these artists were considered to be individuals and approached their art in their own personal style. They had a great influence upon the impressionists which came after them.

Both of the coloured prints are from the ‘Atelier J F Millet’, titled ‘Barbizon’ and are signed ‘Le Garf’ – a known non de plume of Lucien Vader (1902-1978).  I would guess they would come from the mid 1900’s. They were set in their frames by the well known art dealers ‘Frost & Reed’ in 1964. Atelier means ‘workshop’. At an atelier a number of students, apprentices, or assistants worked under the tutelage of a master producing works that would go out under the masters name. I believe that the two story building on the left of the first picture was the home of J F Millet.

I have one other J F Millet in my collection. The last being a print of ‘A Shepherdess Knitting’. I do not know when it was printed but permission to do so originally was granted by a Mr F Keppel (d. 1912). Mr Keppel was an avid supporter of etchers and their work. His life-long love of art brought him in contact with many of the great artists of his day and he probably knew all the successful lithographers and etchers working. You can see from these prints that he loved the reality of his surroundings. He captured the little things that surrounded him with loving detail. 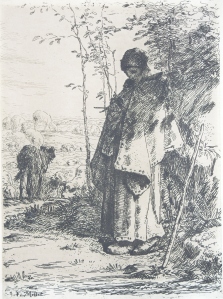