The art of lithography – printing with stones – was invented in 1796. The stone would have a image drawn onto it using wax, oil or fat. An acid would then be applied etching the non-protected (untreated) parts of the stone. These roughened areas would retain moisture when next wetted. The oil-based ink then applied would adhere to the original drawing only – being repelled by the water in the etched areas. The stone is then pressed onto paper and the ink is transferred from stone to paper producing a printed page.

Originally, stone or metal plates were used for lithography but in modern lithography flexible plastic or metal plates are used. Colour lithography appeared in the 1890’s and was often used in the production of posters to promote artists works. With the ability to copy artworks there arose a need for limited editions so that artists could control the price and value of their artworks. 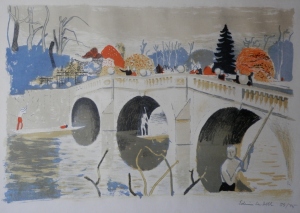 #EdwinLaDell (1914-1970) was a British printmaker, lithographer, illustrator and painter. Edwin’s early tutelage was at the Sheffield School of Art – a scholarship brought him to study at the Royal College of Art under John Nash. La Dell eventually became head of the Department of Lithography at the College. He was a war artist creating public murals and camouflage but his fame came from his post-war works – lithographs created for the coronation of Queen Elizabeth II, for the School Prints scheme, and his own series featuring Oxford, Cambridge, Kent and New York. 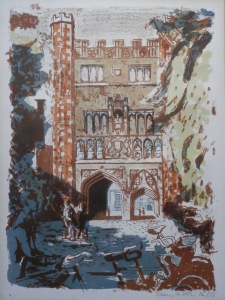 I came across a set of three prints, not long ago. They just happen to be of a favourite place of mine – Cambridge. The three show King’s College from the Backs, punting at Clare Bridge, and the Great Gate of Trinity College. All these lithographs display La Dell’s fine artistic eye and a man at the peak of his artistry. The last image is also in my collection – Fishing at Marlow- was created as part of the Lyons Tea Rooms series. 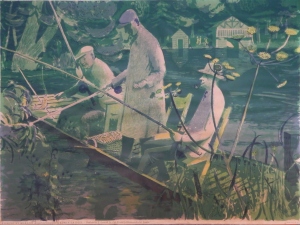