When my wife and I holiday, we tend to work out and plan what we might like to see and do. Our itinerary is not solid but is flexible on the chance that we encounter something we might like to see or do which we had not planned. Even so, one comes across things after the holiday is over and one thinks ‘I’d have done that if I had known about it’. This leads me to today’s piece of art.

We have been to Scotland a couple of times and I know that we have driven very close to ‘Burgie Tower’, Rafford, Moray 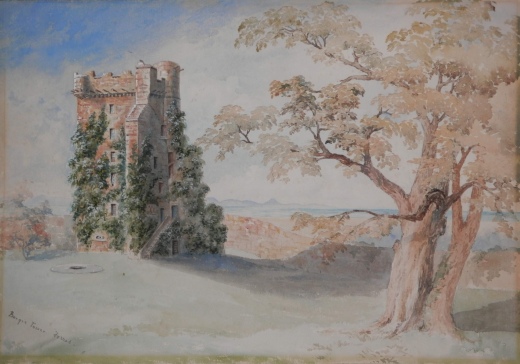 But we have not visited. Granted it does not quite appear as it does in this watercolour. Time has taken it’s toll and although it is now a ‘listed building’, finding funds to keep it in shape is challenging.

The tower was once a part of a Z-plan castle (towers on opposite corners of a rectangular keep) which was mostly demolished in the early 1800’s to provide stonework for Burgie House. The tower dates back to 1602 when it was built by Alexander Dunbar, Dean of Moray and is the only remaining part of the castle.

The watercolour comes from the earlier part of the 20th or late 19th century (I think). Accurate portrayal of the architecture is augmented by the subtle use of light shades of brown and green focusing the eye on the tower which is done in richer earthier tones. It is not signed. It displays a tower draped in ivy and possibly still a liveable residence (all windows and doors intact). A fine open view of the surrounds must have been had from the top of the tower.

I would like to see this in person some day knowing that I had been close already. A part of Scottish history hopefully to be preserved.