I came across three small watercolours this week. They were not signed, but to be honest, it did not take that much research to identify the artist involved. My research led me to #MicheleDeVito. Her first name might also have been spelt as ‘Michela’.

Little is known in regards to this female painter. She was born in Abruzzi, Italy and was known to have worked and resided in Naples when she became a known and respected painter. She may have been the daughter or possibly sister of Camillo de Vito another well known painter of gouache scenes of real life. 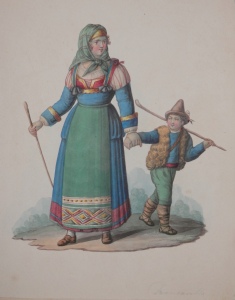 Michela worked in the early part of the 19th century. This is corroborated by the watermark found on one of the pieces I have. The watermark reads ‘ J Whatman Turkey Mill 1837‘. As an artist she was described as “A refined painter, very skilled when it came to drawings, she had the characteristic to make her subject more gentle, compared to her male collegues”.

Three love pieces. Very typical of her work and historically important in regards to the history of local folk costume of the time.