Monochrome means ‘one colour’, so art created in monochrome uses only one colour. Most would think that using one colour would restrict the freedom of the artist but might it not also focus the intent of the artist and thereby produce something more which if colours were used would not be achievable. 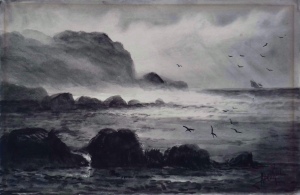 Do we when looking at the seascape miss colour? I think not for this painting exudes an image of the sea which has depth and life, movement and presence. Would that all art even using colours could be so evocative.

Painting in #blackandwhite or #grisaille was predominately religious based from the Middle Ages to the 17th century. The art produced this way might not be paintings but might be done using charcoal, crayon, graphite, or ink. From Dutchman Adriaen van de Venne to artists like Van Eyck, Giacometti, Picasso, Velasquez, Goya, Ingres, Richter, and Pollock all have produced works in grisaille.

The pieces, I present here some of which I have talked about previously are all watercolour paintings.

They span from a 20th century Cornwall? coastal scene to a 19th century Welsh?landscape to an 18th century ( maybe earlier yet) portrait (Hagar and Ishmael) – all done in monochrome. Each trying to invoke some response from the onlooker. They all display excellence but the last is still possibly one of the best pieces of art that I own.