This past week saw me add a couple of #woodblock prints to my collection. The artist is #OharaKoson (1877-1945). Koson’ history is somewhat vague. He was born Ohara Matao in Kanazawa in the province of Ishikawa and is believed to have begun his artistic studies in painting and design at the Ishikawa Prefecture. At some point he studied painting technique under Suzuki Kason. In the late 1890’s, Koson moved to Tokyo.

In Tokyo, Koson worked with a number of publishers. He concentrated on works which portrayed birds and flowers although he did produce works – triptychs- illustrating scenes from the Russo-Japanese war.

It was quite Normal for an artist to use several ‘nom de plume’ and Koson was no different. While working with publishers Akiyama Buemon and Matsuki Heikichi, his works were signed Koson. When he worked with Watanabe Shozaburo (from 1926), he became Shoson and while working with Kawaguchi, he signed as Hoson. It’s no wonder people get confused as to artists when they look at Chinese and Japanese art. It was through his association with Watanabe that Koson became popular internationally, especially in the United States. Koson produced prints until 1935 and he died in 1945 at his home in Tokyo. 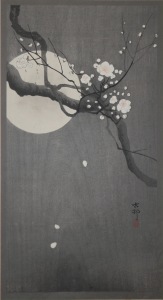 The three woodblock prints I have are Crow on Cherry Tree @ 1910, Flowering Plum and Full Moon @ 1910, Badger and Bamboo in Moonlight @ 1910. They are superb examples of his technique even though they are fairly early productions in his artistic life. Koson’s depiction of birds and body details is masterful. Take note of his work on the feathers especially. They are done with meticulous care. Koson’s bird depictions are considered to be among the best in the 20th century.