Men of the Cloth

#JohnWilliamFletcher (1729-1785) was born in Nyon, Switzerland.  His real name was Jean Guillaume de la Flechere.  He was educated in Geneva and chose enlisted life after his schooling.  An accident forced him out of the military and he traveled to England to become a tutor.  The family resided in London for part of each year and while there John Fletcher first heard of the Methodists and became personally acquainted with John and Charles Wesley, as well as his future wife, Mary Bosanquet.  Mary Bosanquet is known for being the first woman preacher, authorized by John Wesley to preach, in 1770.  Fletcher was ordained in the Church of England and chose to serve in Madeley in Shropshire.  Wesley described him as the holiest man he had ever met, or ever expected to meet “this side of eternity.” He was zealous in work and life and was driven by a sincere religious and social concern for the people in his care. Wesley had chosen him to be the next leader of the Methodists but he died prior to Wesley’s passing. 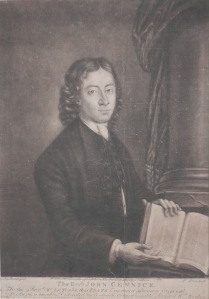 #JohnCennick (1718 – 1755) was born in Reading, Berkshire and raised in the Church of England.  He was greatly influenced by John Wesley but had a number of theological differences with him.  Cennick became an itinerant evangelist in England and Ireland, enduring tremendous and often violent opposition. By the time of his early death ( 36 years of age), he had established over 40 churches.  He was also a hymn writer, some of which can still be found today and is credited with bringing Evangelicalism to Ireland”