Those of you who read my blog regularly will know that I am an eclectic collector but even the items I acquired a while back will stretch your concept of art.  I was convinced to buy these pieces because they were hand-drawn and had some age to them.  So.  I bought a small selection of needlework patterns.  They were nicely drawn and at times on re-used paper.  Parts of letters are used and on another the musings of a poet.

And thus enters poet, RobertBloomfield (1766-1823).  He is no longer a well-known poet but there was a time when he was considered ‘the most important poet of the age’ according to John Clare.

Bloomfield was born in the small community of Honington near Bury St. Edmunds.  He was unfit for farming life and was sent to London to apprentice as a cobbler.  His mother, a teacher, taught him to read and do math.  He loved to read and so he read aloud for is fellow workers sake.  He especially loved the poetry section of the ‘The London Magazine.’

He had his first poem published, The Village Girl, in 1786 but fame came with the publishing of The Farmer’s Boy in 1800.  Translated into several languages, it sold across Europe, America, and further afield.  It brought him fame and wealth.  Although he continued to produce and publish poems, he never again was able to repeat his initial success and from a poet with worldwide appreciation he gradually declined into a life of deprivation and died in poverty.

And so to the reverse of the piece of paper.  Here we find verses 24 to 33 of Bloomfield’s poem ‘Richard and Kate’.  Hand-written and reading exactly as the published version (1802) except for verse 29 in which the published version reads ‘And sons who shook her wither’d hand’ were my copy reads ‘And sons who shook her by the hand’.  And I am afraid my copy is not helpful in verse 30 either, as to the word which has been rendered ‘fairings’ (questionable) but could possibly be read ‘jarrings’ (still unclear). 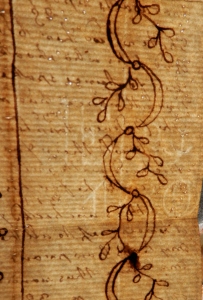 And so not to make this post too long, I have included images of the watermark (the last number is missing but the 180 are there and thus I say around 1800) and two verses at a time for those who migth like a closer look at the writing. 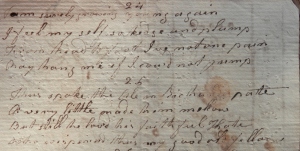