#JacobusHoubraken (1698-1780) was the son of Dutch painter and writer Arnold Houbraken.  He was one of ten children, several of which followed their father into the arts.

Jacobus Houbraken was possibly the pre-eminent Dutch etcher of his time.  He excelled in portraiture and to today his works have rarely been bettered.  There is a softness and delicacy of touch leading to a beauty of finish.  The execution of line proceeding from a skill of drawing expressing a fine sense of reality.  Jacobus was a prolific engraver and his images of English characters found in his ‘Collection of Illustrious Persons’ published in London is likely his best known work.

This pair of etchings show

#JacobvanHoorn and his fourth wife, Jacoba van Selstede.  He was 97 years old when he married Jacoba who was but 23 years old.  They certainly display the amazing skill and talent which Houbraken had.

A short update on a charcoal drawing in my collection by another Dutchman, #JohanvanMastenbroek.  The drawing is signed and dated and shows a canal scene.  I now know that the scene is called ‘Sluisje bij Winter – A View of Schiedam in Winter’. the oil painting which was produced from the charcoal sketch was recently sold by Christie’s in London. I will put both the drawing and the finished oil up. 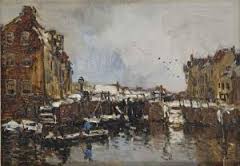