The artists #JohnWilsonEwbank (1799-1847) and #EdwardLeslieBadham (1873-1944) are this weeks artists.  I acquired graphite drawings created by both of these artists, recently. 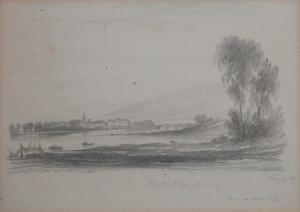 This serene view by John Wilson Ewbank is of the city of Perth and the River Tay in 1825.  Ewbank was the son of an poor innkeeper.  He was adopted by a wealthy uncle who lived in Wycliffe on the banks of the River Tees.  It was intended that John enter the priesthood and was educated to that end but he rebelled and ran away.  He apprenticed with Thomas Coulson as an ornamental painter in Newcastle and then Edinburgh.  He also studied under Alexander Nasmyth.  He was a successful painter and teacher.  His sketches from nature were admired greatly as well as were his coastal and marine scenes.  Late in his life he altered his style and painted great events coming from history such as ‘The Visit of George IV to Edinburgh’ and ‘Hannibal Crossing the Alps’.

Edward Leslie Badham studied at the Clapham School of Art and The Slade. He lived and worked in London for a number of years before moving down to St. Leonards on Sea and eventually to Hastings.

Badham exhibited often and was well respected.  This picturesque scene drawn in 1903 and done only in graphite displays superb finesse and an eye for accuracy.  Drawn in the month of August, one can feel the turn of the year veering into fall.  I love the ancient tree on the far bank – broken yet still striving upward – and the old rail fence.

Two fine drawings from an art that is undervalued these days – the art of the pencil.

This entry was posted in Drawings and Sketches and tagged Perth, rail fence, river, Scotland, shore, trees. Bookmark the permalink.