From Rossini to Morris

The way I collect art is for most collectors of art so very random and non-specific. I do not search for works by an artist or visit galleries, or art auctions to collect but rely solely on people donating art pieces to charity.  But as I have said in other posts, I continue to be amazed at what people donate to charities to be sold.

So, today we will travel from ancient Italy with Luigi Rossini to modern England and William Morris.

#LuigiRossini, the last great etcher of Roman antiquities, graduated as both artist and architect from the Academy of Bologna.  In 1813, he moved to Rome to continue his studies and began to etch the beauties of Rome.  Most of his works were collected and published in a series of seven folio sized volumes entitled ‘Antichita Romane’ in 1829.

His etchings of basilicas, temples, public baths, and other monuments reveal the power and magnificence of Rome.  His depictions were so accurate that students of architecture used them as aids in their studies. His etchings include a number of monuments which no longer exist.  Rossini loved to place figures of local citizens and nobles into his images creating a more picturesque and vitalised image.

When one thinks of #WilliamMorris (1834-1896) one generally is considering his designing of tapestries, wallpaper, fabrics, furniture, and stained glass windows but Morris was so much more. He was textile designer, poet, novelist, translator, and social activist. At this point, I must admit that when I bought this it was framed and so only the page with the woodcuts was visible so was surprised to find that it folded out into something bigger. 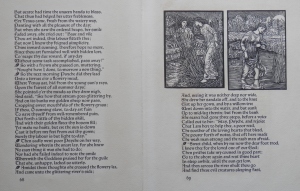 Cupid and Psyche
story and woodcut by William Morris

Although his epic poem was published with great acclaim in 1868-70, the woodblocks and engravings for the images which Morris created from Edward Burne-Jones’ drawings for a later lavishly illuminated version were never used.  Trial tests were done but the union of text and image was found wanting and the project was shelved.  In the 1880’s a small number of sets (total number unknown) were printed in another hopeful trial.  But it was not until 1973 that the illustrations and poem were re-united and successfully printed by Will Carter at the Rampant Lions Press, in Cambridge.   Carter printed from Morris’ original woodblocks and some of the original Troy type from the Kelmscott Press (now in the Cambridge University Press collection) to complete a limited run of the book in 1974. 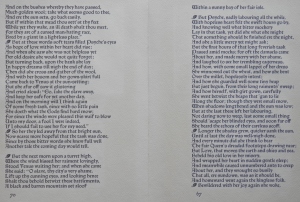 Cupid and Psyche story and woodcuts by William Morris

So, when unfolded the single page became four pages of the poem.

Enjoy and maybe go and read the rest of this poem written by William Morris.