I picked up a couple of pieces this week which were created because an artist found a niche in the market and needed money.  This allowed him to survive and eventually move to Canada where he continued and expanded his artistic view.

#FrederickHorsmanVarley (1881-1969) was born in Sheffield and studied art while at school.  He continued his studies in Antwerp but returned to live in Sheffield where he worked on the docks.  To make ends meet he was advised to paint desert scenes of North Africa for the London art market. He painted Arabian desert scenes with Arab’s and camels along the Nile River. He also produced watercolours of Arabian markets and seascapes.  On the advise of #ArthurLismer he emigrated to Canada in 1912 where Lismer also went to reside.

He served in the 1st World War where his artistic talent led him to be commissioned as a war artist. His paintings of combat are based on his experiences at the front.

For my Canadian readers, you might be wondering why his name as well as Lismer’s might just be slightly familiar.  Well, after moving to Canada, Frederick Horsman Varley and Arthur Lismer became founding members of the ‘Group of Seven’ artists.  Varley is known for his landscapes.  He painted people in green, pink, or purple.  He was one of two from the the #GroupofSeven to paint portraits.  He painted Canadian wilderness that had been damaged by fire or harsh climates. Varley’s major contribution to art is his work with the Group of Seven.

We finish with another enlisted artist. Capt. G F Atkinson.  Curry and Rice (on Forty Plates), or the Ingredients of Social Life at ‘Our’ Station in India.  The book satirizes British officials and residents in a fictional village of Kabob in India, affectionately referred to as ‘Our Station’. The people and places are probably caricatures of those Atkinson encountered as a Captain in the Bengal Engineers. Atkinson drew all 40 plates in the book. Each plate is accompanied by a brief description. 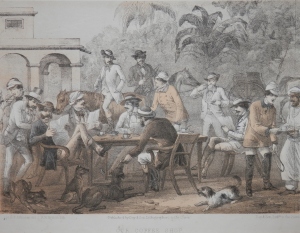 Atkinson, certainly, was not afraid to make fun of authority figures in the province.