#LouisLatouche (1829-1884) is a name that is not well known to people and possibly even to experts but to a few very famous artists he was well known.  Latouche was a painter.  His applications to exhibit his paintings at the Salon in Paris were regularly rejected.  He never really became famous unlike a good number of his associates and friends.  Not wanting to leave his artistic career behind, Latouche set himself up as an arts dealer/supplier.  His shop was located at 34 Rue Lafayette at the corner with Rue Laffitte in Paris. 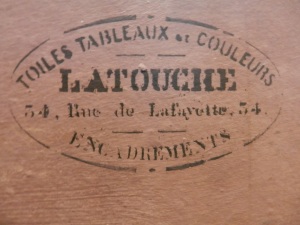 To the left is the stamp on the back of an oil painting I have added to my collection.  A painting done in France somewhere between 1870 and 1885.  Latouche’s wife ran the store from 1875 so that Louis could go back to painting.  She sold the shop two years after her husbands death to Paul Contet.

As an art supplier, Louis prepared canvases and boards for other artists to use.  While Luois was alive and after his death the shop was known as a place of fine colours and modern paintings.  Framing and lining were also available at the shop.  Artists’ paintings were displayed in the shop window – some causing scandal.  A painting by Monet was described  as – “It draws the whole artistic world. There’s been a mob in front of the window the entire time the exhibit lasted, and for the young, the unexpectedness of this violent painting has caused a fanatical reaction.”  Latouche’s clients included Guaguin, Gache, Gautiere, Pissarro, Monet and certainly he would also have known Manet, Renoir, Bazille, Sisley.  A veritable who’s who of #FrenchImpressionist painters at the time.  But then again his clients might also have included the #FrenchRealist painters like Courbet, Millet, Daumier or Corot who painted depictions of unprettified ‘real’ life. 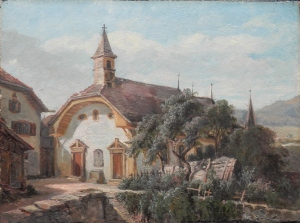 So to the lovely oil. Superbly done with brush and palette knife.  Sublime technique.  An eye for beautiful colour coordination  and application.  The subject is also very interesting since chapels/churches did not usually have two entrances.  Male and female entrances – I don’t know but why.  Possibly.  A friend in France says the architecture looks like it comes from the Jura area of France.  The sunlit front of the church may be the focus of the painting but for me the foliage of the tree, the wooden fence and the creeper growing on the stone wall show the real talent of this artist.

It’s nice to think that this artist board may have been handled by #Gauguin, #Monet, #Renoir, #Corot, or #Pissarro.  An amazing thought actually.