Just the mention of #Bovril likely makes one think of beef extract – but Bovril licensed the reproduction of thirty-nine paintings between 1901 and 1914 from the leading print publisher #CWFaulkner.  Twelve of these were after works by Elsley and six were after Fred Morgan’s paintings.  I recently acquired two of these Bovril prints.  The two I have are after the British artist Alfred De Breanski (1852-1928). 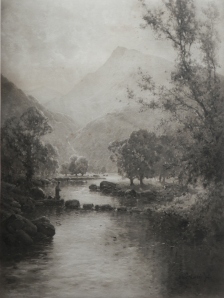 Bovril first offered a free ‘bonus picture’ in exchange for coupons to purchasers of Bovril in 1901, a practice which continued annually for the next decade, however, the scheme was still going in 1916 when 42 units worth of coupons could be redeemed for two prints by A. J. Elsley. (Without coupons the price of either of these prints was 5/3.) A few signed artist’s proofs on india paper were available that year in exchange for 105 units worth of coupons.

‘A Welsh Valley’ by #AdeBreanski is an impressive print.  Alfred de Breanski Senior was a distinguished landscape painter who became famous for his resplendent views of the Welsh and Scottish Highlands.  Often bathed in a flood of golden light, these landscapes usually feature water and cattle or sheep on grassy banks; sometimes a solitary figure is seen the distance. 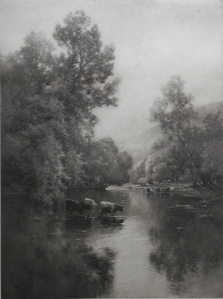 ‘In the Heart of Devon’ is the second print that I acquired and having been to Devon several times, I can attest to the beauty of the county.  De Breanski had a great passion for the wild countryside and he, perhaps more than any other, caught the atmospheric influences of the landscape.

Thank you Bovril for producing these prints. It made wonderful artworks available to the general public for an affordable price.

2 Responses to Art of Bovril