I have added three item to my wall this week, two prints and one charcoal sketch.  When I say bygone in the title to this chapter, you might consider that one of the three items isn’t really that old.  I will begin with that. 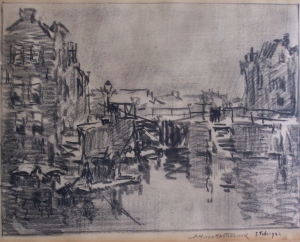 This sketch is not titled so where this Dutch canal/harbour scene comes from I do not know. Johannes Hendrik Van Mastenbroek is described as the ‘Rotterdam harbour painter’.  Born in 1875 in Rotterdam, he is an Impressionist of the New Time.  He painted mostly atmospheric pictures of the Rotterdam harbour and his collected works document the technical progress and the rapidly increasing activity in the Rotterdam port.  Van Mastenbroek boldly depicts reflections in the water, creating a dynamic scene.  Bold strokes, surety of line, accuracy of eye and behold an image of real life has unfolded before you.  He enjoyed painting outside even in inclement weather.  His works are a remarkably correct depiction of the busy day-to-day activities of the harbour life.  His most important works came in 1931 when he portrayed and documented in pictorial form the draining of the Zuiderzee.

The next two items are related in that they are both maps.  One very old and the other’s age is uncertain at this time.  let us begin close by with a map of the City of Cambridge.  I am not sure of the age of this map.  It is not a modern print since it is not made in a dot matrix format in any way.  That should make it a print of an etching but when it was pressed I do not know.  Underneath the map it shows the Cambridge City Council Crest of Arms followed by ‘Cambridge in 1574, engraved by Richard Lyne’.  A lovely early image of the Cambridge and it’s surrounds.  It shows  the colleges which made up the majority of the town being encircled by rural life.  Farms and animals abound on the edges.  Still today, although Cambridge is much larger, it is still surrounded by rich and fertile farmland.

This lovely little map of Europe was done by Jodocus Hondius for the first French-text edition of his ‘Atlas Minor’.  Shortly after the publication of the large folio-atlases a need arose for a smaller sized atlas, one that would be handier and above all, cheaper.  The ‘Atlas Minor’ was larger in format than other small atlases available at the time allowing for far greater detail and more place names than found in its rivals.  I know this map comes from the French-text edition in that on the reverse it has text printed on it.  He is best known for his early maps of the New World and Europe, for re-establishing the reputation of the work of Gerard Mercator, and for his portraits of Francis Drake.  He helped establish Amsterdam as the centre of cartography in Europe in the 17th century.

Jodocus Hondius did something that my family also did many years back. He Latinized his name.  His name originally was Joost de Hondt.