To all things change comes as seen with the previous chapter and its’ etchings. Travel takes one down many roads. We now use GPS to find our way around but before we used maps (pilot and co-pilot). They have gotten us from A to B for hundreds of years. Styles change, place names change, new roads appear and yet they are still what get us to where we are going. The following map I picked up recently and it is titled ‘The Kingdome of England’. 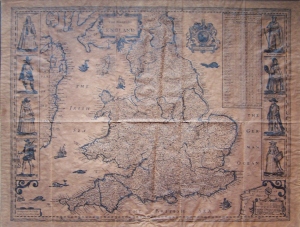 It is by the renowned map engraver Abraham Goos. It is not in wonderful shape any more. It has been folded and put away somewhere and left. If it was coloured it no longer remains so. And yet even in the shape it is in, it remains a wonderful thing to look at. Images of a Noble man, a Lady, a Gentle man, a Gentle woman, a Citizen, a Citizen’s wife, a Country man , and a Country woman adorn the sides of the map. A glossary of shires, cities, bishoprickes, market towns, castles, parishes, rivers, bridges, chases, forests, and parkes has been added. It has ships sailing the seas and leviathans rising out of the deep. It has the British Monarchy logo with its’ motto ‘Dieu et mon Droit’ – God and my right’. It’s a doorway into another time, its’ costumes, its’ class system, and its’ monsters which ruled the seas.

There are maps still being made today but do we use them or even look at them any more. We rely on technology and have displaced the map into the category of art.

This entry was posted in Etching and tagged England, map legend. Bookmark the permalink.