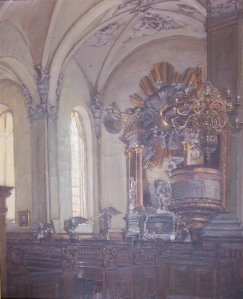 The oil painting is by Belgian artist Christian Frederick Beck 1876 – 1954. Beck is better known for his many early landscape paintings with motifs from the Randers area, and in recent topographic architecture pictures in which he especially cultivated motifs from Christianshavn.This picture is of the interior of Frelser Kirke (Our Saviours Church) Copenhagen. Signed and dated 1947. It shows the pulpit , pews and some of the alter designed by Nicodemus Tessin. The church is one of Denmark’s major tourist attractions with it’s twisted spire. It is a national treasure and a living parish church to some 8000 people.

My second picture today is a street in Paris. A watercolour by the artist DRYZE and dated 1979. Depicting a Paris street in winter (hence the barren trees) its’ lines and colours convince one of the dull cold  and yet with the expectation of life inside the structures pictured. A space awaiting its’ fulfilment, a space soon to awaken with life.

Since posting this, I have been contacted by several people with information as to who Dryze was.  His real name was Michel Frydzinski and sadly he passed away in 1990.  For many years he lived off the Sacre Coeur near Place du Tertre where he worked in Rue Lamarck.  He had a regular stall in Montmartre and painted scenes of the Normandy coast as well as his beloved Paris.  He was French by birth and Polish by descent.  An artist sadly missed but remembered through his expressive art.

28 Responses to Oil and Water