Unless you have been to Bali or Indonesia one most likely has not come across a #lontar.  A lontar is made of palm leaves which have been dried and smoked.  Due to dampness, insect activity, mould, and fragility lontars needed to be copied and replaced quite regularly. 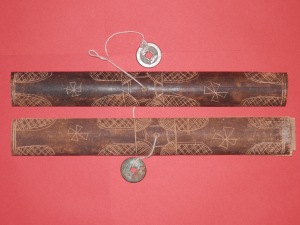 Most lontars come with an outer case which is made of ornamentally carved bamboo.  A string runs through a central hole in the casing and the leaves.  The leaves after being prepared are etched with text and images.  The grooves are then filled with ink to make the text and images visible.  In the case of my lontar a coin is tied at each end of the string.  The coins are Sinkiang Qing dynasty Redcash Dao Guang Tong Bao Aksu which were minted between 1821 and 1850. 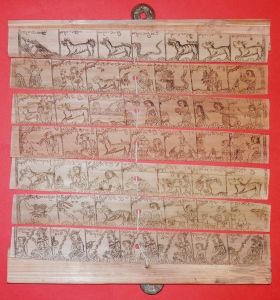 Firstly, I apologise if I have mistakenly turned the leaves so that the story is actually backwards.  The lontar which is pictured to the right is a #WektuTelu ritual book and originates with the #Sasak people of Lombok, Indonesia.  The Wektu Telu religion is a blending of Islam, Hinduism, and Buddhism as well as other ancient beliefs and traditions.  Lontar contained writings from religious rituals and law, astronomy and astrology, homoeopathy and healing, stories and epics, history and genealogy, performing arts, and illustrated stories.  There remain a few Hindus in Bali who can still read the old scripts found on lontars.  Although lontars have been copied for many centuries some are now unreadable due to the loss of the ability to read the language.  In the case with the Wektu Telu lontar pictured, no translation of the script or interpretation of the illustrations has been found. 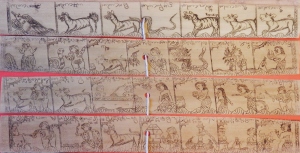 Only in Bali will you find those who still practice the old skill of lontar writing – some for preservation sake and others for the tourism trade.  A lontar can take over a month to copy – not counting the time it takes to prepare the leaves.