I am always pleased when I find pieces which have been created by female artists for I know that in years past those artists might possibly not have received the deserved credit or accolades for their work.  So to slightly tip the scale, this weeks chapter is about #EdithEmmaStrutton. 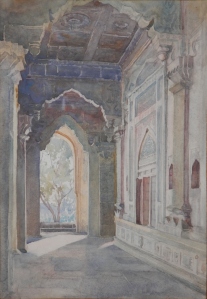 Born #EdithEmmaMunnings in Christchurch, New Zealand, 1867, she studied at the Canterbury School of Art.  After graduating she taught at the school and was a successful teacher as well as artist.  In 1900 she married the Reverend H. Strutton and with him moved to India as missionaries.  They lived and worked in Baramati, Sholapur (Criminal Tribes Settlement), and Lonavala where Edith died  in April of 1939.

The image on the left is of the #IbrahimRauza.  It was erected in 1627  as a mausoleum and memorial for queen Taj Sultana wife of king Ibrahim II but the king also lies there.  It is proposed that this rauza was the inspiration for the wonderful Taj Mahal.  Arches, delicate carvings, geometric and calligraphic designs abound. 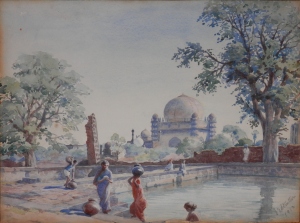 The #GolGumbaz is also in Bijapur and was built as the mausoleum for Mohammed Adil Shah, Sultan of Bijapur.  It was built to dwarf the Ibrahim Rauza which was erected by his father.  It was completed in 1656 and is of impressively simple design.  In the centre of the floor beneath the dome lies a cenotaph slab which marks the grave below it.  This is the only instance of this practice to be found in the architecture of the Adhil Shahi dynasty.  Like other great domed buildings, the Gol Gumbaz has a “whispering gallery”.  The pantheon in Rome has an area covered without supports of 15, 833 sq ft while the Gol Gumbaz has an area 18, 109 sq ft.  Simple – yes.  Impressive – very.

Two beautiful paintings by Edith Strutton which display the great talent which she was blessed with.